I was in a conversation & didn’t say a word for 20 minutes. People who know me, know that’s uncommon. But I was totally engaged.

I was talking with Heath Hyneman & Kevin Wallace & these guys have one of the best entrepreneurship stories I’ve ever heard, I’m going to try to tell it here:

So Kevin & Heath started a business in ’02. They had the rights to distribute NCAA football game audio over a cellular network. This was a huge opportunity but to make it work required a good bit of network infrastructure, so they went out to the Atlanta technology community to raise money and find supporters. But the Atlanta tech community was no help. They found no interested investors, advisors, or helpful entrepreneurs. Atlanta tech failed.

They were left with the choice: pay a 3rd party for their infrastructure. Things were going smooth but when the 3rd party saw their potential, they threatened to pull the plug if Kevin and Heath didn’t deliver them $100k within a week. Without the support of investors and the community, they couldn’t make the deal and were forced to shut down. They lost their business, their confidence & their startup mojo.

Weeks later Heath was considering going to work in the construction business. He had sworn off startups and the Atlanta tech ecosystem. He was about to be driving a truck for a living, delivering toilets to newly built homes when he started to inquire on the economics of building supplies. He learned the economies of scale for buying in bulk…and discovered there was an online vendor making $60k per day selling supplies online. This company’s website sucked and they weren’t leveraging online marketing.

They put together a website & optimized their SEM. The next thing they knew they had to shut down the site every few hours because demand was so high. They turned this startup into National Builder Supply, a $40 million/year badass e-commerce business…without investors, without support of the Atlanta Technology community. 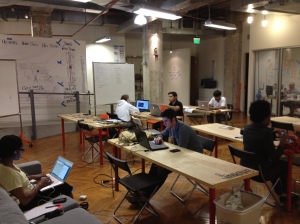 But now they’re back….with a vengeance.

They want to build this community so that entrepreneurs with ideas don’t have to suffer like they did. And they are starting off with a bang.

Kevin & Heath created Hypepotamus. It’s not a coworking space or an incubator…it’s a community donation. They’ve paid for a year’s worth of space, utilities & their time in the Biltmore building, midtown Atlanta. And it is badass. Entrepreneurs are free to come and collaborate, build, design & create. I’ve worked there and love it.

These guys are not leaving Atlanta to chase tech opportunities. They’re building the tech community for us, for their kids, for the future. I urge you to get down here & support them.